What percentage of the game is mental focus and control?

How much time are you spending developing your mental focus and control?

When 1st place is determined by 100th of a second or a single point then those with the mental edge will win every time.

Mind is the foundation of
all successful athletic performance.

Use it to your advantage!
Improve your performance!

All successful athletes know that when they’re confident and comfortable, their chances for success are dramatically higher, even though their preparation and physical fitness may be the same.

Lack of focus and confidence is a primary reason for mental errors, mistakes, and the inability to perform under pressure.

While talent and physical skill plan an enormous role in every athlete’s success, not many people understand the importance of beliefs, thoughts and emotional state while engaged in the game. Your mind can make or break you.

By understanding the power of your mind and being able to use it to your advantage, you can improve your performance. This is where sports hypnosis comes in!

Hypnotherapy can help you to:

PLUS: Hypnosis has been scientifically shown to:

Hypnotherapy should be a part of any athlete’s “mental toolkit” to strengthen their performance and mental outlook for success. Just as an athlete uses equipment to help improve physical fitness, sports hypnosis is an amazing tool to do the same for their mind.

Mental skills training will give you an edge
on your competition.

Pro and amateur athletes alike come across a vast amount of pressure. Many feel they are not reaching their true potential. An athlete may be dealing with a loss of confidence or their sense of commitment is gone. They may be afraid of messing up, not doing well or feel they are choking under pressure. The disappointment and frustration is further amplified by their critical voice telling them they could have done better. Predictably these limiting beliefs and negative emotions result in poor performances. What is certain is they know they have it in them to be a better.

Any athlete knows that your mind plays a crucial role in achieving peak performance. Your subconscious can literally cause you to be paralyzed with fear at the wrong time, lose your confidence and block you from reaching your true potential.

Whether it is outside pressure, the pressures of potential opportunities, or the pressure you put on yourself, sports hypnosis can help lift that weight off your shoulders. Utilizing the right mental techniques you can increase your effectiveness, reach your true potential, and get back to having fun on the field!

And all that comes with better scores, less stress, and better performances during competitions.

Every day, coaches see athletes with incredible talent who can perform in practice, but who can’t carry that performance into competition. They know and understand that the mindset of their athletes is often what determines their success.

Coaches are constantly looking for that extra edge that will put them over the top in the ultracompetitive sports world. How do they motivate their teams and get more form the talent they have at their disposal.

Hypnotherapy can also help overcome any blocks to performing together as a team.

Tiger Woods is an athlete who has spoken about his use of hypnosis to slow down time, hit the ball farther, and be even more creative in his golf short game. He has learned to be able to remove all background noises and distractions, and concentrate fully on the shot he is about to take. He’s able to get out of his own way, and allow his body to do the work. You can listen to a snippet of a BBC interview with Tiger discussing his experience with hypnosis.

Phil Jackson the famous NBA head coach insisted that the Chicago Bulls practiced daily self-hypnosis when he coached Michael Jordan and the Bulls to their 6 NBA Championships. Later, after coaching the Los Angeles Lakers to a win in Game 7 of the Western Conference Finals in 2002, Jackson credited his morning practice of self-hypnosis, meditation, and visualization with giving the Lakers the belief that they could win. This shows that it’s not just important for the athletes playing the game to utilize hypnosis, but also the coaches and those coming up with the in game strategies.

Walton Glenn Eller and Vincent Hancock won gold medals in the 2008 Olympics. They had something in common, they both used hypnosis to increase focus, control their heart rates, and allow precise movements.

Mary Lou Retton used hypnosis to prepare for the 1984 L.A. Olympics and to block pain in her injured foot to win the Gold Medal.

Ken Norton used hypnosis to defeat Muhammed Ali in the 1973 fight. Ken was a 7-1 underdog in that fight. Ali began using hypnosis soon after.

In 1987, Canadian Olympian Angela Baily used sports hypnosis to move past her stuck state and achieve her Silver Medal. She believes so strongly in the sports hypnosis that she went on to become a hypnotherapist.

In an interview with The Daily Telegraph, boxer Mike Tyson explained how he regularly used the power of hypnosis to prepare for fights during his career. Known for his fierce presence in the ring, Tyson credits his explosive style to working with a hypnotist. Tyson’s manager used to have him professionally hypnotized two or three times a day – before sparring, before training and before fights. Having won his first 19 fights by knockout, Tyson is widely regarded as one of the most dominant heavyweights to ever live. This shows that hypnosis doesn’t just have to be about relaxing, it can be used to generate resource states to unleash your best self.

How Can Hypnosis Help You?

Whether you are a university player, professional, weekend warrior, high school student, or just out there for fun you deserve to play at your best. 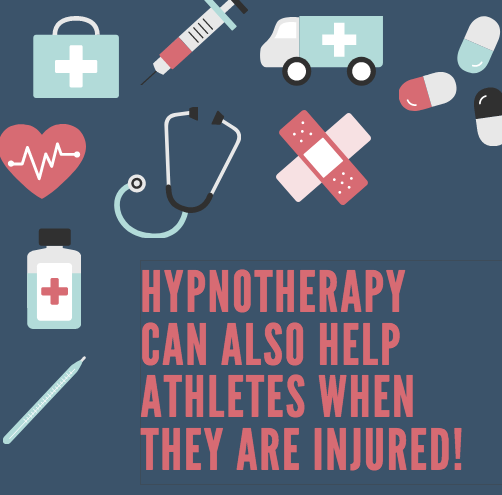 Hypnosis Has Been Scientifically Shown To:

If you do happen to be injured, it might be a good opportunity to explore the benefits of hypnosis so you come back even stronger and faster than before.

The body is designed to heal itself. Although this complicated process does work automatically, it can accelerated and enhanced by hypnotic techniques. By directing the subconscious mind to focus energy on a specific system in the body, more of your natural resources will go there.

That means that if, for example, you were burned, your body will naturally begin the healing process which may take a week to complete. If you were to employ hypnosis to quicken this process, you may complete the healing in half the time.

And the use of hypnosis to speed up the recovery time after surgery has been shown time and again. Two studies from Harvard Medical School show hypnosis significantly reduces the time it takes to heal.

The first study showed that six weeks after an ankle fracture, those in the hypnosis group showed the equivalent of eight and a half weeks of healing. That effectively demonstrates that using hypnosis helped that group heal bone fractures 41% faster. [1]

–  Journal of the National Cancer Institute

“75% of clinical and experimental participants with varying types of pain obtained substantial pain relief with hypnotherapy.” [3]

“Hypnosis has been demonstrated to effectively control pain and emotional distress and to improve recovery…results revealed a significant, large effect size…indicating that surgical patients in hypnosis treatment groups had better outcomes than 89% of patients in control groups.” [4]

–  CA: A Cancer Journal for Clinicians
Published for the American Cancer Society

“A world-first study has found medical hypnosis can reduce pain and anxiety in children being treated for serious burns…. By the time the third bandage and dressing change came around, the hypnotherapy group had a 90% reduction in pain levels and 84% power levels of anxiety.” [5]

“Since 1992, we have used hypnosis routinely in more than 1400 patients undergoing surgery. We found that hypnosis used with patients as an adjunct to conscious sedation and local anesthesia was associated with improved intraoperative patient comfort, and with reduced anxiety, pain, intraoperative requirements for anxiolytic and analgesic drugs, optimal surgical conditions and a faster recovery of the patient.” [6]

More Information On The

[3] Hypnosis for the Relief and Control of Pain, American Psychological Association, July 2, 2004, https://www.apa.org/research/action/hypnosis

sports hypnosis near me